There are a variety of exfoliating techniques for facial skin.  The methods primarily divide into two categories- manual exfoliation and chemical exfoliation.  Both have the same goal – to rid the skin of dead cells that accumulate on the outermost layer of the skin known as the Stratum Corneum. By doing so, the skin looks and feels healthier, the pores are opened, and the skin can best absorb revitalizing vitamins and minerals.  Facial exfoliation is especially beneficial for more mature skin since it increases the cell turnover and helps slowdown the signs of aging.

It is very important to note that when it comes to exfoliation, often, less is more. The exfoliation should be a gentle action on your skin.  You don’t want to over-scrub and/or injure your skin.  Slight redness is normal, but if you are over scrubbing and causing long-term redness or inflammation, you need to change what you are doing.  Also, if you have sensitive skin you should use a very mild exfoliant so that you don’t damage it.

You also shouldn’t exfoliate your skin every day.  Once or twice a week is often enough.  The frequency of the exfoliation depends on your skin type, how sensitive it is and the type of exfoliating products you are using.

Manual or physical exfoliation uses a variety of aids to exfoliate the skin.  These can vary from a natural bristled brush to an exfoliating glove (also known as a loofah).  There are also scrub creams that contain small grains which exfoliate the skin.  If you choose such creams, make sure to look at the ingredients and choose a product with small grains.  Try to avoid large exfoliants like nut shells and fruit pits since they have a tendency to cause microscopic tears on the skin.  Many dermatologist recommend using jojoba beads or sugar.

Chemical exfoliators dissolve dead cells on the skin.  In addition, they increase the cell’s turnover and help the skin look and feel smoother and brighter.  The two most popular chemicals are alpha-hydroxy acids and beta-hydroxy acids.

The alpha-hydroxy acids, known as AHAs, are extracted from natural substances. They are highly recommended for those with dry skin since they remove the ‘glue’ that binds the dead skin cells together.  Their major downfall is that they are water soluble and as such can’t penetrate deeply into the pores.

Beta-hydroxy Acids, BHAs, on the other hand are oil-soluble molecules.  They operate by breaking down the bonds between the cells and are able to deeply penetrate into the pores and skin.  Furthermore, BHAs have anti-inflammatory and antibacterial properties which makes them ideal for individuals with active acne or very oily skin.

The two products can be combined and you can create a exfoliating routine that includes both AHAs and BHAs.

If you have sensitive skin, it is recommended to stick to more mild chemical exfoliants.  These are usually derived from fruits.  Recommended products include those with papain which is derived from the Papaya fruit, and bromelain, derived from Pineapple.  The fruit enzymes dissolve the keratin in the skin and only affect the Stratum Corneum.

1. Clean your face.
2. Apply your chemical exfoliant- use small doses and apply gently.
3. If the product is also a peel, follow the instructions and leave it on your face for the recommended duration.
4. Rinse your face with lukewarm water and apply a moisturizer.

The NowMi treatment offers a novel alternative for facial skin exfoliation.  The NowMi device uses a vitamin C rich effervescent tablet that gently exfoliates the face. During treatment, the tablet is combined with the NowMi cleansing gel.  This combination causes a chemical reaction that dissolves small granules in the tablet and forms a mild abrasive surface.

The efficiency and speed of the exfoliation process is significantly enhanced by the use of sonic energy.  The NowMi Pro device emits 6,000 sonic pulsations per minute which ensures that every pore is thoroughly cleansed.  In addition, the sonic energy increases the circulation of the blood which stimulates skin cell renewal.

In addition to removing dead skin cells and thoroughly cleansing the skin, the NowMi Pro infuses the skin with vitamin C, vitamin E and hyaluronic acid.  These revitalizing ingredients slow down the signs of aging and help it look glowing and fresh. 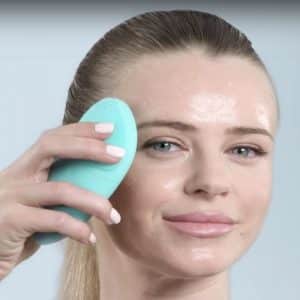 There are many different exfoliating techniques for facial skin.  The two main methods are manual exfoliation and chemical exfoliation.  Both remove dead skin cells from the outermost layer of the skin.  The NowMi treatment offers a novel solution in which the skin is gently exfoliated using an effervescent tablet and it is automatically infused with nourishing vitamins and Dead Sea minerals. 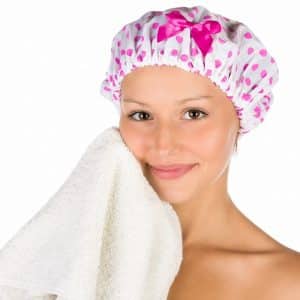 Daily facial skin cleansing is one of the most important things you can do to make sure your skin remains healthy and looks its very best.  Every day our skin is exposed to endless extrinsic factors which damage it and cause pre-mature aging.  These factors include exposure to pollution, cigarette smoke, bacteria and toxins which cause dirt and oil to build up on the skin and block its pores. Makeup also clogs up the pores and it is important to remove it thoroughly. Therefore, in order to enjoy healthy and glowing skin it is vital to have a good facial skin cleansing routine.

There are different levels of facial skin cleansing.  The first level is washing your face with water.  While this is better than not doing anything, its effectiveness is limited as water alone removes only about 65% of oil and debris from the skin’s surface.

The next level involves using a facial cleanser.  Good cleansers are able to deeply cleans the skin and clear away accumulated makeup, dirt and oil. They also remove dead cells from the skin’s surface.

One level up involves exfoliating the skin.  This can be done using exfoliating devices or the NowMi effervescent tablet.  The exfoliation doesn’t need to be performed every day.  If you are able to exfoliate your skin once a week that is more than enough. The exfoliation thoroughly removes dead skin cells and reveals a fresher skin layer. Following the exfoliation your skin will feel softer and smoother.

The benefits of facial skin cleansing: 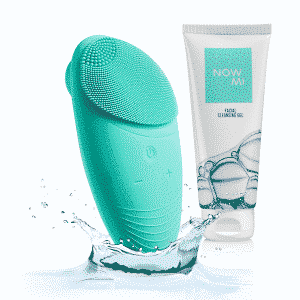 The NowMi Pro  is a home-use device that enables you to perform two treatments- daily facial skin cleansing and weekly spa skin rejuvenation.  The daily facial skin cleansing includes a facial cleanser that deeply cleanses the skin and rids it of accumulated dirt, oil and makeup.  The effectiveness of the cleansing action is significantly improved because the NowMi Pro uses sonic energy.  The device emits 6,000 sonic pulses per minute which ensure that the facial cleansing gel penetrates and thoroughly cleans all of the pores.

The facial cleanser also contains vitamins E, B3, B4 and Dead Sea minerals which nourish and revitalize the skin.

In addition to the daily facial skin cleansing, the NowMi Pro enables you to perform weekly facial spa treatments in the comfort of your home.  The facial treatment includes 4 actions:  skin exfoliation, nourishment, oxygenation and protection. The skin exfoliation gently removes the dead skin cells from the outermost surface of the skin and further cleanses the skin.

Best of all, unlike complicated facial skin cleansing routines, the NowMi treatment takes only 5 minutes and you can carry it out at home.

Regular facial skin cleansing is very important if you want to maintain healthy younger looking skin. The cleansing removes makeup, dirt and oil that accumulate on the skin and damage it.  The NowMi Pro device is an excellent solution that enables you to perform deep facial skin cleansing on a daily basis and to exfoliate the skin as part of the weekly facial spa treatment. 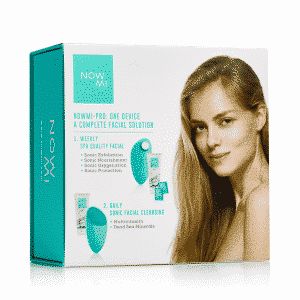 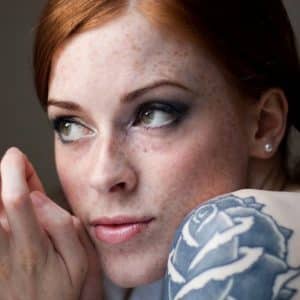 Facial skin lightening refers to treatments that even out the skin’s tone and give it a homogeneous and clear look.  This is done primarily by reducing and/or eliminating blemishes on the skin that cause dark spots.  Facial skin lightening is different from skin whitening since it doesn’t involve any bleaching of the skin.

While hyperpigmentation doesn’t pose a medical concern, the patches of melanin cause the skin tone to be uneven.   Fortunately, there are many aesthetic facial skin lightening treatments that curb the production of melanin and reduce/eliminate existing melanin deposits.  As a result, the skin looks clearer, lighter and more radiant.

The skin is composed of different layers. One of the deeper layers of the Epidermis is called the Basal layer. In the Basal layer, skin cells are formed, and some of the cells migrate to form the outer layer of the skin.  The Basal layer also contains cells called melanocytes.  Melanocytes are responsible for transporting melanosomes – cells that contain melanin.  The Melanocytes therefore set the skin tone of each individual.  Within the melanocyte cell is an enzyme called tyrosinase which is responsible for the production of melanin.  When the tyrosinase enzymes create an excessive amount of melanin, hyperpigmentation forms.

In order to limit hyperpigmentation, many facial skin lightening products have been developed which inhibit tyrosinase and stop it from producing excessive quantities of melanin. These products are popular not only among people who want to reduce existing hyperpigmentation but also as a preventative measure to limit future hyperpigmentation.

Some of the common ingredients used to lighten the skin are:

Hydroquinone is a steroid based medication that has been frequently used to treat skin pigmentation.  The advantage of Hydroquinone is that it effectively limits the number of melanocytes in the skin and thus curbs the production of melanin.  However, the safety of Hydroquinone has come into question and its use has been banned by the European Community for cosmetic use and the FDA announced in 2006 that it could potentially cause cancer.

Fortunately, there are a myriad of natural solution for facial skin lightening. Primary among them is vitamin C!

Kojic Acid is an additional and natural alternative to treat hyperpigmentation.  Kojic acid is produced from fermented fungi and it inhibits the over production of melanin in highly pigmented skin. Kojic acid is a widely used ingredient for facial skin lightening.

Arbutin is a completely natural solution that acts like hydroquinone.  It inactivates the tyrosinase enzymes and therefore the production of melanin. It has been shown to effectively lighten and brighten the skin tone as well as correct hyperpigmentation such as age spots, melasma and freckles.

The NowMi treatment is an effective solution that quickly and safely lightens the skin.  Firstly, during treatment the facial skin is exfoliated.  The exfoliation gets rid of dead skin cells but also removes darkened skin cells in the outermost layer of the skin.  As a result, it lightens hyperpigmentation.  Secondly, during the NowMi vitamin C oxygen facial treatment, the skin is infused with 50% concentration of pure vitamin C.  As mentioned above, vitamin C curbs the production of melanin and thus the creation of pigmentation and also evens out and lightens the existing skin tone.  Vitamin C is also a potent anti-oxidant which helps the skin protect itself from UV rays and thus slows down the appearance of pigmentation.

The NowMi Pro oxygen facial treatment also includes a daily cleansing routine that includes vitamin B3.  This vitamin has been showed to prevent the melanin from migrating to the upper layer of the skin.